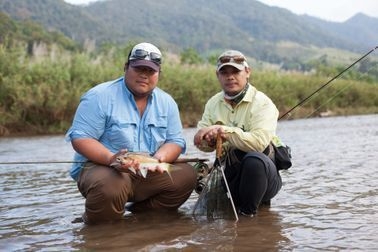 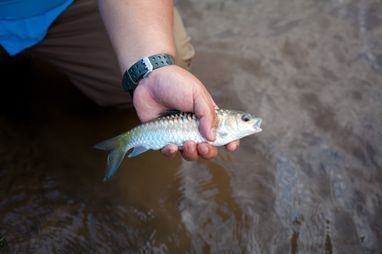 Fly fishing has always held a special place in my heart ever since I had the privilege of meeting a group of fine gentlemen who are all avid fly anglers that makes up an organization called Tippecanoe Fly Fishers. My first experience with a fly rod was through the organization’s annual casting clinic where they were kind enough to spend some time working on my fly casting. Though my time was cut short due to my scheduled relocation back to Thailand, I made sure that I had all the necessary gear to continue to fly fish back in Thailand. Barramundi ponds were widely available for me to go and throw a fly rod from time to time but after a while, it just wasn’t fulfilling.

It all started when my buddy, Dave Hosler of Pilecast.net send me a YouTube clip of a teaser of Thai One On that I learnt of the Golden Mahseer that was thriving in the streams of northern Thailand. Fast forward to the present, almost three years since I relocated, I was introduced to a group of like-minded fly fishers at Flyaholics.com and met Bobby through a mutual friend. Having heard of his name from various websites and from the movie, Thai One On, I knew that this provides a golden chance for me to discover the “real” fly fishing that is available in Thailand. Bobby and I managed to connect over the phone for a few times and we decided that I needed to go up north and check out the awesome Golden Mahseer. Two days later, flights were booked, gears were prepped and hotel reservations were made. I was to meet Bobby, almost a complete stranger, at the Chiang Mai airport and we were to drive almost four hours to fly fish a stream in a Karen village territory.

During the journey, I was able to spend the travelling time getting to know more about Bobby. Half Thai and half Karen, Bobby has a special relationship with the Karen villagers and was able to start a conservation program where villagers are benefiting from keeping the rivers clean and the fish plentiful. A sizeable portion of the fishing fees fly anglers pay to fish the rivers goes to a fund set up for the villagers to improve their community. So far, the funds have been dedicated to the improvement of the villager’s education system as well as infrastructures that improves accessibility into the village. Personally, I have found that Bobby’s efforts and passion in developing the villager’s livelihood and conserving the natural habitat to be highly effective and Thailand’s fishery elsewhere would benefit greatly using this conservation model as a case study. Apart from setting aside funding for the villagers, Bobby also employs young villagers as helpers in transporting drinks and equipment which he stated that he envision them to become a guide themselves eventually. His initiative in getting them introduced to fly fishing has already started with providing the kids with a fly line where they attach it to a makeshift bamboo rod to start casting around.

The river that we were to be fishing is a little river called the La River, which was rather quite accessible yet, somewhat remote. As we approached a bridge that crosses the river, I immediately jumped out of the car to check out the river from the bridge and to my surprise, there were hundreds of Golden and Blue Mahseer just hanging out just at the bottom of the bridge. At that point, I couldn’t get into my wading boots fast enough. What a rush to see all those fish that could possibly end up tugging at my fly line! As previously mentioned, most of my fly fishing experience was in still water and I’ve only had a handful of trips that I was fishing in actual rivers or streams. There was a lot to learn about fishing dry flies and nymphs including the proper presentation that would not spook the fish away. Fishing still water, the importance of landing that fly is not as important when compared to the clear water these fish are accustomed to. With excitement gushing through my veins, I sent out a fly like I would normally do fishing for Bass or Barramundi right into the school of Mahseer that I previously saw on the bridge and to my amusement, none of the fish was interested in taking the fly. Seriously? Hundreds of fish less than five meters away from me and I can’t get them to take a fly? At that point, I knew that all my fly casting skills that I’ve picked up so far is going to be thrown out the door and I’m going to have to pick up the new techniques up fast if I was to have a productive day. After leaving me to chase all the fish away without catching any, Bobby gradually steps up beside me and asked if I was ready to catch some fish. His knowledge of the water from the insect’s life cycle to the various stages of the local fruits that Mahseer feeds on amazes me. All I needed to do was to make that cast to where he is pointing and there was going to be a bite. Sure enough, the moment I was able to land that fly at the exact position with the right landing technique, a fish came up and takes the fly just as Bobby have described. 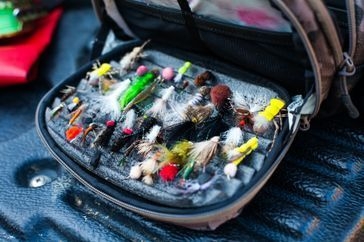 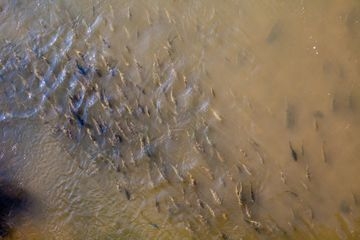 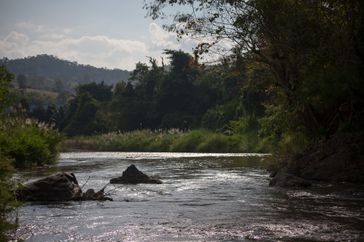 After spending half a day learning the various techniques such as the water haul, mending, air mending and casting with an open loop, I was able to start catching fish on a regular basis. Apart from the Golden Mahseer and Blue Mahseer, Burmese Trout was also a fish that we targeted towards the end of the day. All in all, six hours of fishing the river and we barely covered a kilometer of water! It was time to say goodbye to the river for the day and rest up for another day of fishing the serene La River.

Back at the hotel, Bobby and I reviewed the casts that was catching fish and the casts that wasn’t trying to identify the difference and see which area that I needed to improve on to put myself on more fish. The second day started off at the bridge with the only difference was that we were to wade downstream rather than upstream like the day before. There was a noticeable change in the temperature of the river as well as the climate that affected the Mahseer considerably. They seemed to be less interested in chasing the fly, which prompted Bobby to switch it up by targeting Burmese Trout instead. I wasn’t disappointed as Burmese Trout was chasing the dry fly one after another. Even though the sizes that I caught weren’t impressive, each trout was putting up a great fight on the six weight rod.

Unfortunately, all good things must come to an end and I left the La River with a great impression. The fishery, the villagers and Bobby himself played an integral part in the overall experience and made it an enjoyable trip. I cant come up with anything that is better than getting to fish a pristine river with a knowledgeable guide while knowing that the money is going towards a good cause. 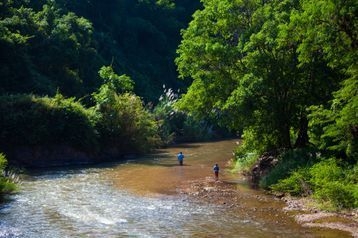 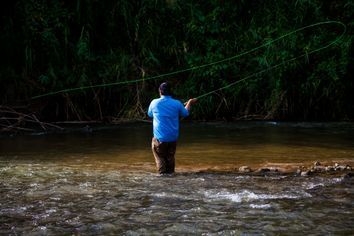 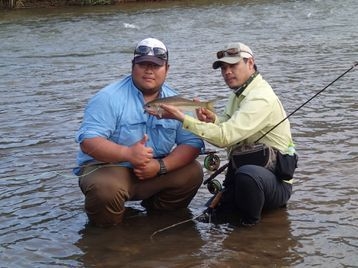 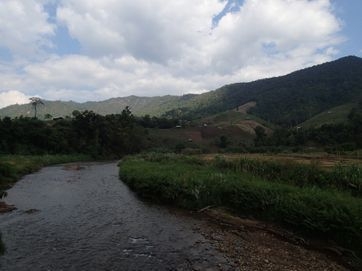 Bangkok Fishing Guide Service is proud to for an agreement with Bobby and NG River Guide in bringing our valuable customers on a fly fishing journey that brings you into a remote area of the Karen village in search of Golden Mahseer, Blue Mahseer and Burmese Trout. Contact us for more information. Accommodation and transportation can be arranged through us for a hassle free fishing trip.